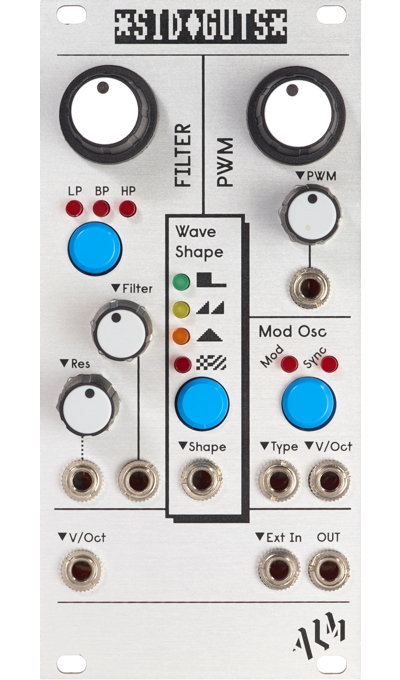 The SID GUTS is a fun little module from ALM that brings a SID chip into Eurorack. If your knowledge of ancient integrated circuits is less than stellar I’ll have you know that SID (Sound Interface Device) is a classic sound generator chip that was used in the Commodore 64 home computer.

The SID GUTS module provides CV-control of an actual SID chip. While it doesn’t utilise all the capabilities of the SID chip;
for example the SID has three voices and the SID GUTS only uses one; the SID GUTS is a convenient way of bringing some lo-fi chip-tune sounds into your modular. The module comes without a SID chip, it has a socket in which you mount a SID that you presumably already own. Real SID chips can be hard to find, and draw a lot of power, so an alternative option is using the SwinSID which is a modern SID clone. The SwinSID can be ordered with the SID GUTS and it consumes a lot less power than a real SID which is why I picked a SwinSID for my SID GUTS. The only downside of the SwinSID that I can see is that it doesn’t allow the filter to process external signals. This is no big deal for me because I have a bunch of other filters in my rack already and the SID filter isn’t that impressive to begin with.

So what are the capabilities of the SID GUTS?

As mentioned the SID GUTS provides a single SID voice. The oscillator is a wave-table oscillator with pulse, sawtooth, triangle and noise waveforms. The waveform can be selected manually or it can be cycled from a CV input which can create some pretty glitchy noises. The pitch is controlled by a standard V/Octave CV input. Without modulation or arpeggiation the only waveform that clearly says “C64” is the noise — it is wonderfully steppy and immediately brings to mind a million explosion sound effects from old C64 games.

The filter is an analogue resonant multi-mode filter which is switchable between a 12dB/octave low-pass, a 12db/octave high-pass and a 6db/octave band-pass mode. The high-pass and low-pass modes can also be combined into a band-reject (or notch) mode. The resonance and the cutoff frequency can both be voltage-controlled. As previously mentioned the filter can be used on external signals but only if you have a real SID chip in the module. The filter resonance is quite subtle and, I’m told, varies a lot between different models of SID chip. With the SwinSID the resonance is audible when cranked up to max but I would not go so far as to say that it is clearly audible. At least to not my amateur ears. If I A/B a filter sweep with the resonance at 0 and then at maximum, I could hopefully tell which is which. On the other hand, if I was presented with a single filter sweep and had to tell if the resonance was on or off I’m not sure that I could deliver an accurate verdict.

The width of the pulse wave can be changed with the PWM knob or modulated through a CV input. This sounds gorgeous and is, for me, the best bit of the SID GUTS.

Modulating the oscillator frequency or the pulse width with a CV signal works fine for slow modulation rates. Since the SID only updates its inputs at 50Hz, modulation rates close to or above this rate doesn’t work as expected and you can forget about FM or audio-rate PWM.

I use the Expert Sleepers ES-3 module as my computer-modular interface and it requires a calibration step every time it is started. The calibration consists of the ES-3 sending a range of control voltages to the V/Octave input of the oscillator being calibrated and then detecting the actual output frequencies that are generated by those voltages. This process does not work well with the SID GUTS. In fact, I could not get it to work at all. I suspect that the waveforms generated by the SID are too noisy for the ES-3 calibration plugin to be able to extract a solid frequency from them.

Looking at the waveforms with an oscilloscope it is apparent that there is a constant signal with an amplitude of 2.5V and a frequency of around 1.25kHz superimposed on the wave. This tripped up the auto set function on my oscilloscope and I would guess that this is what confuses the ES-3 calibration as well.

The SID GUTS excels at chip-tune-like bleeps, bloops and chirps. Playing rapid arpeggios to simulate chords with a single voice still gets you that Rob Hubbard feel which I presume is the reason you would want a SID-chip in your modular.

I tried to play the theremin part of the Doctor Who Theme but was bested. A 2-octave portamento glide sounded truly horrible, and not in a good way.

I really didn’t have room for the SID GUTS in my modular budget so I bought it as a kit because that allowed me pretend that it was a crafts project instead. ALM sells (or sold) complete kits with PCBs, the panel, all the knobs, buttons and other components, a very good build instruction and, optionally, a SwinSID. The software is open source and available for download so if you want to brew your own firmware that is possible too.

Building the kit was great fun. It pays to have some experience soldering because debugging a badly soldered pin can be seriously tricky. I’m by no means an experienced solderer and although I have dabbled, in hindsight I should have done a couple of practice runs to brush up before starting on the real build. Some of the solder joints, particularly the early ones, ended up a little anaemic but the only really bad one was a pin that I missed completely. Happily that was fairly easy to see once I gave the board a careful inspection.

I did make one other mistake. The SID GUTS consists of two boards that are joined together, sandwich style, using four single-row pin-headers. Following the instructions, I soldered the male and female parts of the pin-headers onto their respective boards separately. However, I ended up soldering the female parts at a slight angle. This made joining the two boards a difficult and nerve-wracking experience — I had to use so much force bending the pin-headers to get the pins to fit that I was afraid I’d break the boards in half. Naturally the previously mentioned unsoldered pin was at this point A) undiscovered and B) unreachable so I had to separate the boards and rejoin them an extra time to fix that. In hindsight I should have joined the male and female parts of the pin headers together first, then put the boards together, and then soldered the pins to the board. Lesson learned.

So what do I think of the SID GUTS? It was fun to build. It looks cool and it certainly sounds retro. Is is useful? For sound effects, definitely. I don’t find myself using it much for melodies due to tuning issues but I would not definitely blame that on the SID GUTS — it could just as well be down to pilot incompetence. When it comes down to it, can you really resist having a SID in your modular? If you can then you’re probably from a different generation than me.