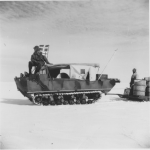 These are pictures from Nordaustlandet, Svalbard and possibly from Björnöya. 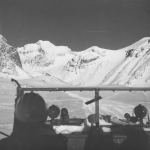 Photos from the Tarfala Research station. 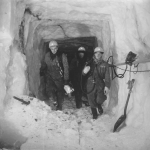 In 1962 a tunnel was drilled into the front of the glacier Isfallsglaciären in the Tarfala valley. This was quite a big project considering that Tarfala is many miles from the nearest road. 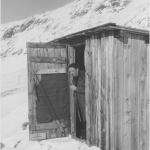 These are photos taken in the field by my father, Stig-Rune Ekman (1932-2010),  during the 1950s and 1960s. Stig-Rune worked as an engineer and seismologist at Stockholm University. He participated in the following expeditions:

and he worked for many years at the Tarfala Research Station in the Kebnekaise-region in Sweden.

Some of the photos are scans of paper copies that were lying around in various states of disrepair, others are scans from negatives or slides, so the quality varies quite a lot. Most of these photos lacked any notes on where they were taken and who is on them. In some cases it’s easy to see where they were taken if you are familiar with the terrain and sometimes it is nearly impossible. Snow looks much the same on Bjornoya as on Devon Island. Identifying the individuals present in the pictures is even harder. If you have any information regarding who is present in the pictures or where they were taken, please let me know. Also, if you are one of the individuals present in the photos and don’t want to be, let me know and I’ll remove the offending picture.